Welcome to Genesis Environmental where we always deliver innovative pest control solutions when you need it most.

No two pest infestations are the same. Circumstances and situations are always different.

This means that using the same method of pest control, management and eradication will not always be successful. This requires creative pest solutions tailored to your particular situation.

When faced with a pest, you want a quick solution that is effective and affordable.

You also want to have confidence in the ability of the pest control company that they can deliver the service that they say they do.

We offer services to treat all pests, including: 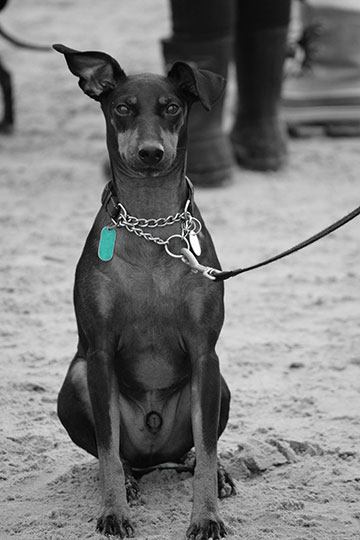 Drake is an important member of the team at Genesis Environmental.As well as being Martin’s daily companion, Drake performs vital pest control tasks.

As a Manchester Terrier, Drake is a rare breed, the pedigree of which stretches far back in history.

Unlike other terrier breeds, the Manchester Terrier has its roots in urban civilisation.

In the 19th Century, dogs like Drake were used for one purpose – hunting out rats in and around the textile mills, towns and villages of Manchester.

Their ears were cropped to prevent damage from rats, a practice that is now outlawed, as you can see from Drake’s fine ears.

But, as new pest control technology and methods came to fruition, the popularity of using dogs like the Manchester Terrier, started to decline. By the 1940s, the breed was a rarity, with only 11 dogs registered with The Kennel Club in 1945. Happily, the breed has become popular once again, making an appearance in the show ring and as a pet.

And Drake is extra special – he is the only professional working Manchester Terrier in the world hunting down rodents across the county and he is a much-loved family pet.

Got a problem with rats? Call Drake.

Genesis Pest Control could not have been more helpful. Having contacted a couple of other companies who indicted they could not help us, Genesis came up with various solutions to eradicate the problem of squirrels in our eaves.

A number of methods were used until the problem had been solved. Thank you so much for your perseverance, prompt responses and for going out of your way to help us.

I would not hesitate to recommend this company. So friendly, helpful too!

Just a quick note to thank you for a quick, efficient and very friendly (and informative) service!

We have been using Genesis for the past 4 years. We have always found them to be professional, efficient and diligent. As well as our monthly visits/reviews they are also contactable in an extra ordinary situation, which we have found useful in the past, within hours of the call being made they have been at site dealing with the issue for us. A comprehensive log of all works carried out is left at site and maintained in line with work done. Overall I can’t recommend them highly enough.

Thanks again for dealing with the rat problem we were experiencing.  Excellent, friendly service – efficient, and definitely did the job!

I’ll recommend you to friends without reservation; that was money well spent :)

I’d like to thank you for coming at such short notice, I was very pleased with how you tackled the problem, and also I didn’t feel like I was overcharged which I was really dreading as obviously people will do anything to get rid of the problem and I think lots of people could take advantage of that. It didn’t take very long at all and I’m over the moon to say so far (touch wood) it seems to have worked, the first night I think I got a couple of bites but I was expecting that, last night I don’t think I got any and I had one of the best night’s sleep of my life!! Thank you so much!

We have had the services of Genesis Pest Control as a precaution for some time. We recently had a problem with vermin because of building works in Rochdale.

We would like to let you know that we have been very pleased with the technician who turned up as soon as we phoned and in this instance, as we were very worried, did a very thorough job of checking our premises. We have just had a good rating from the environmental health and have recommended the technician to several of our neighbours.